He worked as an assistant professor in the field of Mathematics at the same university in 1984-1990, associate professor in 1990-1995 and professor in 1995-2009. Prof. Dr. Sebahattin Balcı worked as a professor at the Istanbul Aydın University from 2009-2010, and since 2010 he executes his duties at the Kyrgyz-Turkish Manas University, in Bishkek, Kyrgyzstan.

He has been invited as a keynote speaker to many national and international scientific meetings, attended and organized seminars, conferences, observation and examinations.

Prof. Dr. Sebahattin Balcı, who is a member of many prestigious scientific and professional organizations, was a forerunner in the realization of numerous national and US-EU-supported international projects for the development of vocational high schools, organized industrial zones, vocational-technical education and other fields of education in Turkey. Projects executed by Prof. Dr. Sebahattin Balcı are accepted as pioneering works in the improvement of vocational education in Turkey.

Prof. Dr. Balcı, who supervised the Kyrgyz-Turkish Manas University on the position of Co-President, in 2010-2011, serves since then as the Rector, and under his leadership the University was augmented to the leading position in Kyrgyzstan by far and into the top five universities in Central Asia.

By virtue of converting the Kyrgyz-Turkish Manas University to one of the most prestigious universities of the Turkic world and the great benefits it provides to the community, Prof. Dr. Balcı was donated with state medals of the Kyrgyz Republic and several other awards by various institutions.

Prof. Dr. Sebahattin Balcı is fluent in English and Kyrgyz. 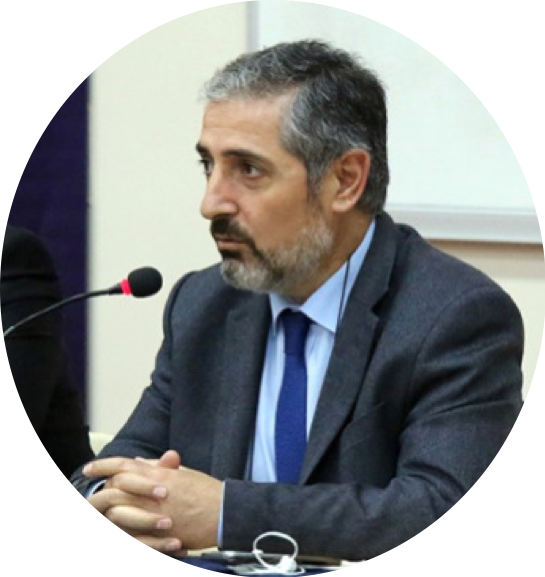 Biber worked as a research assistant at Atatürk University, the Faculty of Arts & Sciences (1992-2000) and as a Dr. Research Assistant until 2001. In 2001, he became a faculty member, and in 2005 he received the title of associated professorship from the same university. In 2011, Biber became a professor and worked in the same university. In 2016, Biber became a faculty member of the Department of Biotechnology at Necmettin Erbakan University.

On January 25, 2017, Prof. Dr. Mehmet Biber was nominated as the Rector of Ardahan University.

Since 2014, Biber is the editor of Turkish Journal of Physics and he has several articles published in SSCI / SCI / AHCI Expanded journals.

Prof. Dr. Şakir Aydoğan was born in Erzurum on 01.06.1972. He graduated from the Department of Physics at Ataturk University in 1995 and, in the following two years, he lectured physics in various schools affiliated to the Ministry of Education. He completed his MS (2000) and PhD (2004) in the Department of Solid State Physics at Ataturk University. In 2004, he became a faculty member in the Faculty of Arts & Sciences at Atatürk University and, in 2007, he worked as an associated professor in the same faculty. In 2013 he received the title of professorship.

Among his publications, there are five books and 80 SCI/SCI Expanded articles.